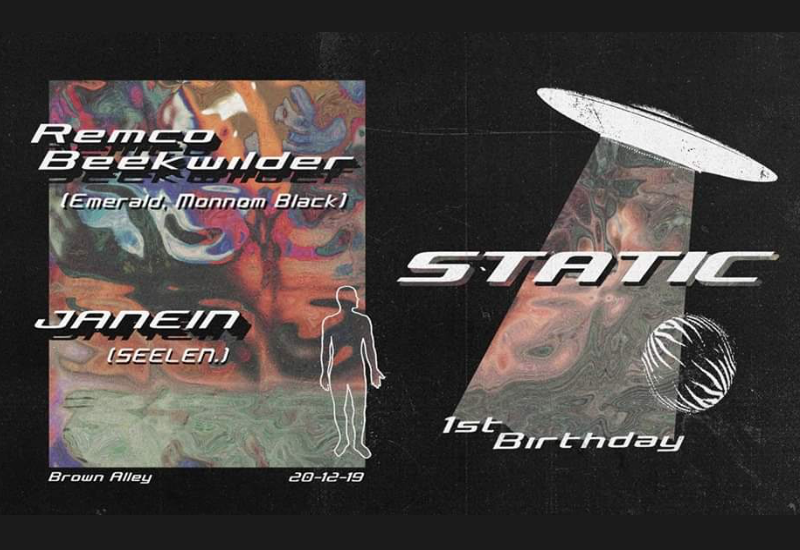 1 Year of Static ?? Lets fucking party. Thanks to anyone and everyone that has supported us this past year it has been a sick one so to celebrate we've called in two of our favourite European techno machines Remco Beekwilder(Emerald label, Monnom Black) and JANEIN (SEELEN.). All we've asked of them is to hop on a spicy 4 point Funktion-One (Official) Sound system and blow the roof off Brown Alley.

Born and raised in the south hideout of the Netherlands and moving through life with a DIY attitude. Picture this with the desire to merge old-school with the modern and the Dutchman's fundamentals for his signature sound are no longer a secret. Continuing on the heritage of electronic music he's aiming to create a nostalgic getaway. His productions continue to be mature, ranging from energetic hooks and playful riffs to rawness and depth.

During his time as a DJ and Producer, JANEIN's musical career has been akin to the flight of a spaceship. While not without it’s obstacles, the young german artist has been running on full gear unintimidated and has henceforth left big marks on the techno scene like BASSIANI, Distillery, Institut Fuer Zukunft, Blitz Club Munich, ://about blank and TRESOR Berlin to a few.

Be it by running the SEELEN imprint, dismantling one of the stops on his quickly growing tour-schedule or delivering relentless, trance-tinged techno cuts with a clear nod to pulpy 80’s science fiction. His selection in one of his DJ-sets also shows a particular sensibility to what makes Rave culture, with a unique take on techno spanning modern chugger’s too old school EBM anthems.

We would like to respectfully acknowledge that this event will take place on stolen land, traditionally owned by the Wurundjeri People of the Kulin Nation. Sovereignty has never been ceded.