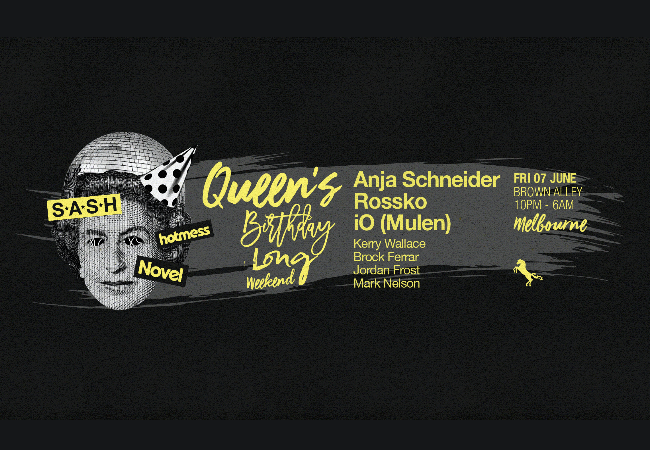 After a small hiatus the big horse is galloping back interstate from Sydney to Melbourne. On the 7th of June S.A.S.H is returning to the free city of Melbs, this time around to create some mayhem at Brown Alley, together with our brothers and sisters from Novel (Tours & Events).

We are bringing some big names with us to kick start your Queen's Birthday Long Weekend, and set the tone for the rest of it. After 10 years, Germany's Anja Schneider is finally back in Australia and could be called a queen herself as she has been a relevant name in the scene for many many years now.

Next to her we've invited the over 10 year resident from FUSE Londen; Rossko. It has always been an absolute pleasure having Rossko at our party in Sydney and we didn't want Melbs to miss out on him playing there.

Last but not least, we are presenting Ukranian royalty iO (Mulen), to fire up the dance floor. It's his first time coming over Down Under and can be found as a regular on everyone's USB pushing the political agenda of Micro House across borders like no other.

Baptised as 'The Perpetual Motion Machine' this German powerhouse of a woman doesn't know how to slow down, giving her everything to the international music scene. After stepping away from her label Mobilee after 12 years, she now goes on a more personal journey; celebrating creative freedom and handing it to everyone around here.

Immersed in London's rich music scene, this now Berlin-based deejay holds a 10 year residency with the infamous FUSE London party. Growing at first as an exquisite selector and finding his ground in the higher levels by just perfecting that skill. He now focuses on producing a sound which connects the dots between techno, house and garage.

Alexander a.k.a. iO is co-owner of Mulen Records, returning to the stage with a more original sound, exploring the depths of house music. In search of binding traditional and classical genres with a hint to the future, combining old with new and in the process creating something else. Approachable by his recognisable groove, but constantly speaking to an underground music crowd.