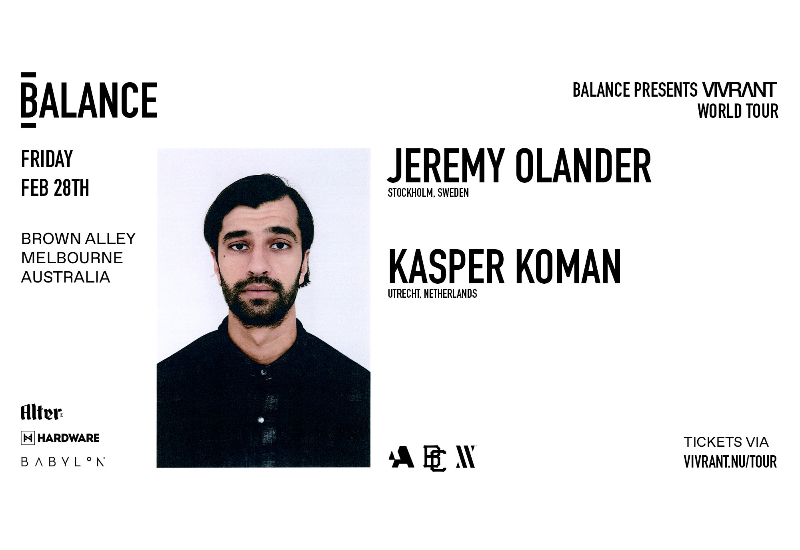 The Swedish Anjunadeep, Bedrock, Last Night On Earth artist and Vivrant label founder Jeremy Olander is on a grand ascent.

Since Jeremy’s first release on his label Vivrant in December of 2015, the imprint has seen nine out of its fourteen EPs make #1 on Beatport. Parallel to the label’s growth, the founder himself has seen his own profile ascend closer and closer to the very top of the game.

In 2018, the chart-topping melodic house and techno virtuoso played notable shows at Printworks in London, Chalet in Berlin, Sydney’s Electric Gardens, Montreal’s Stereo, Labyrinth Open in Croatia, Pleinvrees in Amsterdam and Woobar. He also put on several label showcases with his label Vivrant in Buenos Aires, Stockholm and introduced his Vivrant at Sea boat party series in Toronto, New York, and Boston, which all sold out.

Yet another soul lost to the world of synths. This soul wanders around by the name of Kasper Koman. Hailing from the very middle of the Netherlands, Kasper has been working on his sound for quite some time, traversing many genres, resulting in a unique blend of happiness, darkness and emotions. He has established a unique signature as a designer of infectious beats, syncopated rhythms and impelling melodies. With support from the likes of Guy Mantzur, Khen, Guy J, Nick Warren, Hernan Cattaneo, Navar, Sonic Union, Marc Poppcke, Tim Engelhardt, D-Nox, BOg, Chicola and many others this man is starting to make quite a name for himself as a producer.