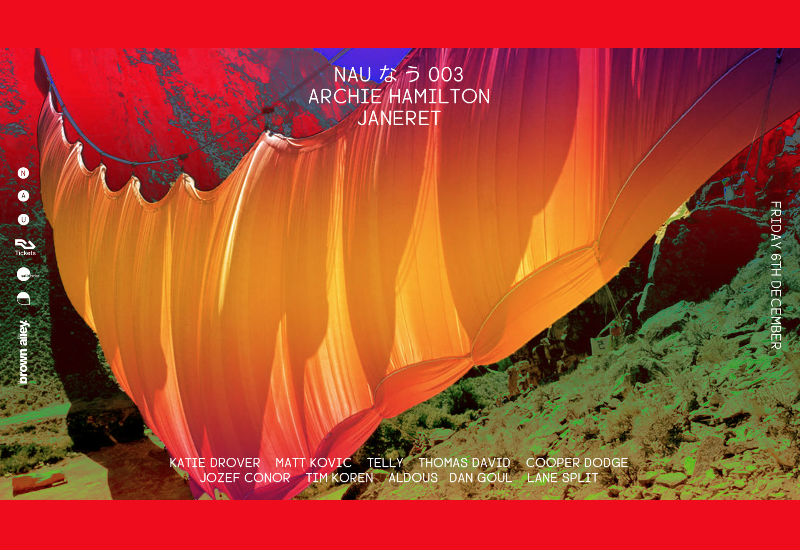 Stepping into the first weekend of the summer, Nau returns with a top-tier showcase of sleek sounds...

Descending on Brown Alley will be two artists who have steadily risen to the vanguard of modern dance music: Archie Hamilton (FUSE / UK) and Janeret (Yoyaku / FR). Rounding off the bill will be Australian export Katie Drover (Dokutoku Records / Berlin) and selected guests.

A dynamic selector, an accomplished producer and an influential label owner, the past decade has seen Archie grow into one of the scene’s most consistent and dedicated artists. Through both the catalogue on his imprints Moscow Records, Moss Co. and Arkityp, and his own impressive discography on labels like Pleasure Zone, Fuse, 2020 Vision and Be Chosen, Archie has distinguished himself amongst a handful of genre-defining artists. Offering a nod to his UK influences whilst firmly facing forwards, Archie’s punchy and driving sound has been lauded as an influence by many of the scene’s rising talents.

In addition to regular global appearances as part of his Fuse residency, Archie’s schedule sees him frequent some of the international circuit’s most iconic booths: in the past 6 months alone he has played Fabric, Amnesia, Sunwaves, UP Festival and DGTL festival.

It would be impossible to chart the growth of the French minimal music scene without mentioning the contribution of Mickael Jeanneret. An integral part of the Yoyaku brand, Janeret has become synonymous with the kind of enchanting and immersive atmospherics that distinguish his productions. His releases on a number of the Yoyaku sub-labels, including YYK no label and Aku, in addition to his own Joule Imprint, have led him to be recognised as one of the rare “purchase-on-sight artists”, as one Discogs user writes.

The elegance and depth of Janeret’s musical style translates to DJ sets that consistently captivate and unify dance-floors. Janeret’s passport is one of a truly global artist. With a presence has been felt by crowds on every continent, Janeret’s return to Australia is highly anticipated.

One of Melbourne’s own, Katie Drover carved out a unique spot for herself amongst the Australian scene before relocating to Berlin where she is currently based. In addition to curating Dokutoku Records, Katie is a respected producer in her own right whose deep and heady sounds can be found both on her own imprint and labels including Pleasure Zone, Carpet & Snares and Subsonic Music.