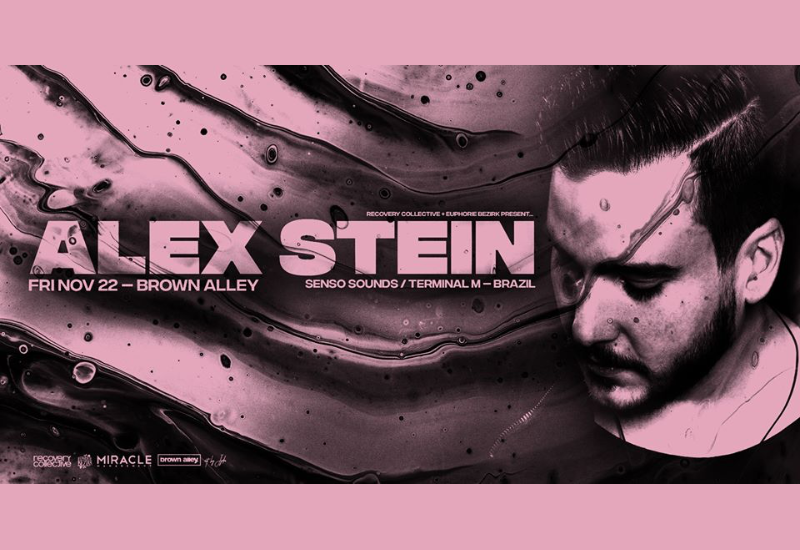 After a sell out event for us in 2018 Alex Stein is back following his performance at LUFT 2019 for an exclusive club show on Friday November 22nd at Brown Alley - supported by:

Alex Stein is a true Brazilian (São Paulo) homegrown artist that has his roots all the way from the old continent, his German background -he even has the German citizenship and is based in Berlin- compelled him day by day to work harder & harder to achieve his unique electronic sound, from an early age he knew this was the way to go. The ‘Bavarian-Brazilian’ has made his own way thru vast musical studies (including Audio Engineering, studied at the SAE Institute in Frankfurt), and much trial & error he got to where he is now. One of the most well-known and revered artists of the new Brazilian techno / techno-house scene. Also worldwide. Whether as a DJ or producer.

His greatest commitment and passion has always been electronic music. Quite clear now. That he represents with all honors the new generation of Brazilian artists, too. Alex Stein is in everyone's ears, not in vain he explored and released his futuristic uplifting techno-sound on Filth on Acid, Suara (highly respected label where Coyu is the head-honcho) as well as on Oliver Huntemann’s Senso Sounds imprint; to don’t forget also a bunch of phat productions on Tronic, Octopus Black Label, Los Angeles based Hydrozoa, Dear Deer (alongside K.A.L.I.L.), Warung Recordings or Sincopat… previously in Bunny Tiger, Great Stuff Recordings, ​Herzblut, etc. In all those cases he has surpassed all expectations in critical and sales.

It seems he will follow the same footsteps of his friend, fellow of profession and countryman Victor Ruiz. Who is unstoppable publishing on labels such as Octopus, Terminal M and of course, Senso Sounds, and Suara. At the same time, he has accumulated an incredible legion of followers, not only in his home nation Brazil, but throughout the world thanks to performances in Canada, South Africa, Australia, and of course the main European capitals. As we know his headquarters are now in Berlin, the ever-glowing German capital, a perfect place to continue evolving on his greatest passion: techno music.